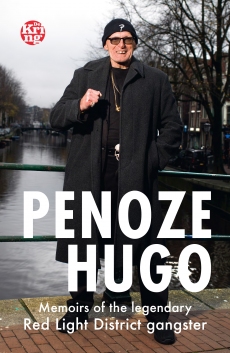 Hugo Broers is one of the last faces of the old Amsterdam penoze. Growing up in the Warmoesstraat, in the middle of the Red Light District (de Wallen); abused by his father on a daily bases, he picked up on the unwritten underworld codes like no other. He befriended famous Dutch criminals, and ‘cleaned up’ the Wallen neighbourhood with his own team. He spent his life fighting, stabbing, and dealing drugs, subsequently spending nearly 14 years in prison.

With nicknames such as ‘Robin Hood’ and ‘The monster of the Warmoesstraat’, he became world famous in Amsterdam and far beyond.

In Penoze Hugo, the autobiography, Hugo speaks candidly of his disrupted childhood, the world of prostitution and drugs he grew up in, famous criminals, the millions he earned and lost again, as well as the wisdom he gained through the years.

A must-read for True Crime fans!